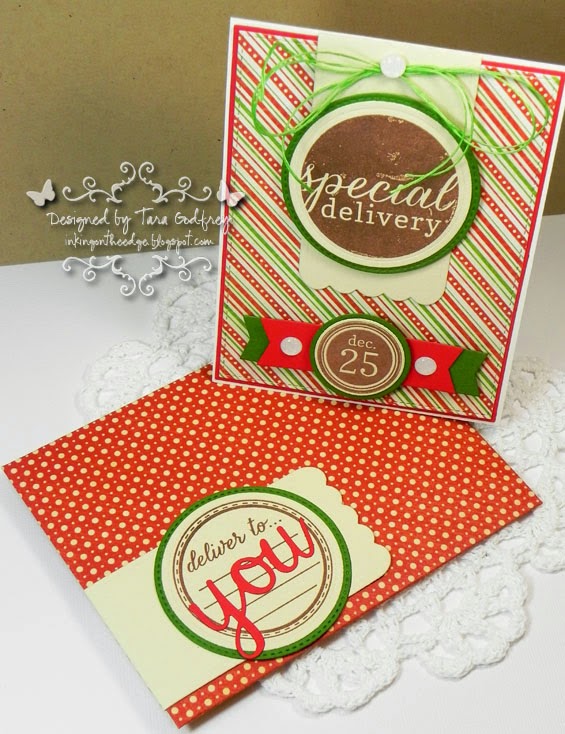 Hello fellow 'Fetti Fans! Today we are previewing the Reverse Confetti October Mini Release!!! It is such a fabulous mini release and I'm SO excited to share the innovative Envie Wrap Confetti Cuts and the fabulous and versatile Roundabout and Roundabout Additions Stamp sets. 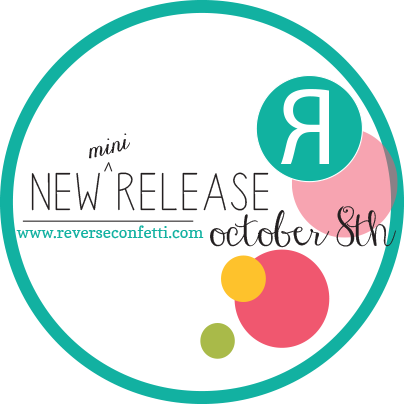 The New Reverse Confetti Mini Release will be available tomorrow, October 8th! Make sure to stop back tomorrow for the Countdown to Confetti Release Day blog hop!

First up is the Christmas card I made with Graphic 45 'Twas the Night Before Christmas 12X12 paper and I used the NEW Envie Wrap Confetti Cuts Layered with the Circles 'N Scallops Confetti Cuts. I kept my card simple as I wanted to make sure it would fit in the envelope that I made. I also used the Tinsel 'N Trim Stamp set and the fishtail label from the Tag Me Confetti Cuts.  I embellished with a little AC hemp cord and few white sparkly Gumdrops.

I finished of the inside too and stamped another sentiment from the Tinsel 'N Trim Stamp set on the small tag from Tag Me Confetti Cuts.

I love that the NEW Envie Wrap Confetti Cuts is versatile enough to use on a card or  may other creative ways but I think its intended use is just SO cute and such a GREAT idea! I think I'm going to get much more use out of the Envelope Punch Board that I just had to have ;) now that I can make such cute Envie Wraps for them. I made this envelope from Graphic 45 paper with the Envelope Punch Board. I then stamped a sentiment from the NEW Roundabout Stamp set on cardstock cut out with the Circles 'N Scallops Confetti Cuts and added the die-cut word "you" from the Tag Me, Too Confetti Cuts.

The Envie Wrap has a perforated edge making it easy to wrap around the envelope. I stamped with the dashed lines stamp from the NEW Roundabout Stamp set...the perfect spot to add the return address.

Thanks SO much for stopping by and havin' a little look at my Reverse Confetti card and envelope wrap with the NEW Envie Wrap Confetti Cuts and the NEW Roundabout and Roundabout Additions Stamp sets.

Leave a comment on each of the designer's blogs for a chance to win a $15 gift certificate.  Comments will close at 5pm CST on October 8th and the winner will be announced on October 9th on the Reverse Confetti Blog and our Facebook page.  In addition to having a chance to win just by leaving a comment on the sneak peek posts, we are also running a Facebook promotion for a chance to win a $15 gift certificate. After you are done checking out the sneak peeks, head on over to OUR FACEBOOK PAGE and look for the promotional graphic. 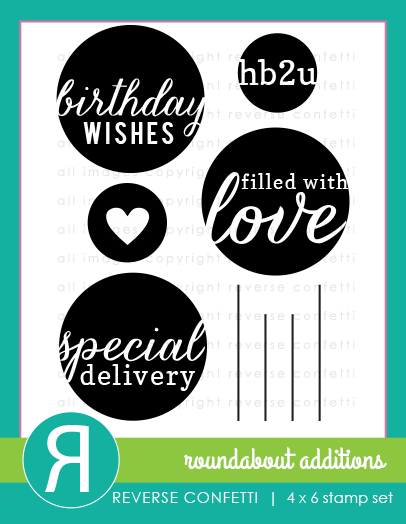 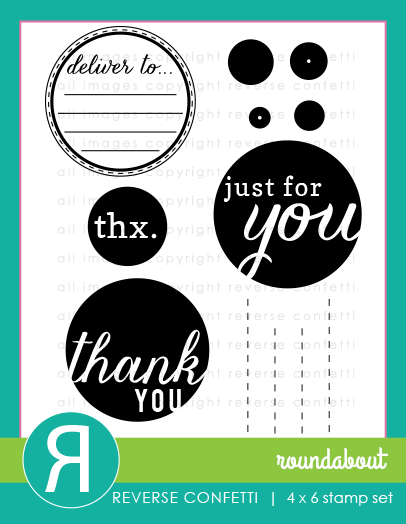 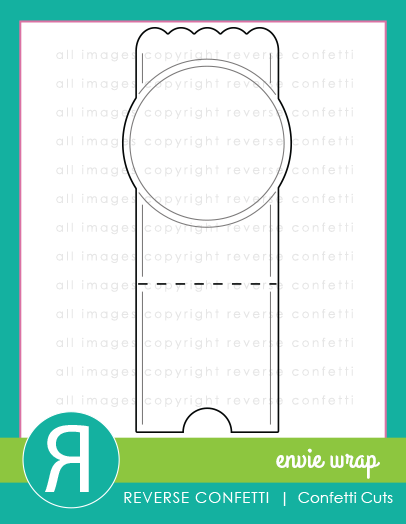 Sooooo awesome Tara!!! Love the festive feeling of this. You nailed it!

Love these cards, what an awesome mini release <3

This new wrap die is so versatile! Love your ideas for your cute Christmas cards.

Love your cards and that envelope wrap!

LOVE these Tara! That envelope wrap is amazing!!

The envelope idea is wonderful. I'm going to make my own. I also love your paper choices!

Your card with the matching envelope is a sensational showcase of the new products. This release may be mini, but it sure has a maximum impact! Love it...and yes, I think it's a must have!!
~c

Darling card and envelope.
Love the way the band wrapped around the back
thanks for sharing some wonderful card/envelope

Fabulous Christmas ideas! This is a great mini release!

What a fab color combo! And what FUN new sets! Love this, Tara!

Like how you used the Envie Wrap on the Christmas card.

I love your Christmas cards and the new envie wrap is wonderful, can't wait to get one! Thanks for sharing!

Very festive. Love the fun DP you used, and those awesome new releases.

I just love everything! Anyone would love to receive these:)

What a great holiday set! The bright colors and fun patterns are so attractive.

Lovely creations! Very festive! Thank you for the inspiration.

BEAUTIFUL card Tara, LOVE IT, inside & out, LOVE your matching envelope too!!!
WOW - these stamps are PERFECT for so many occasions and the Envie Wrap, well it will soon be on everyone's MUST-HAVE list - it's SO COOL!!!
THANK YOU for sharing your CREATIVE INSPIRATION!!!

LOVING your SWEET Projects for today!! =)WOWOWOWOWOW!! What Great Holiday Ideas!! THANKS for sharing and have a Fabulous Week!! =)

These are awesome, great Xmas cards!