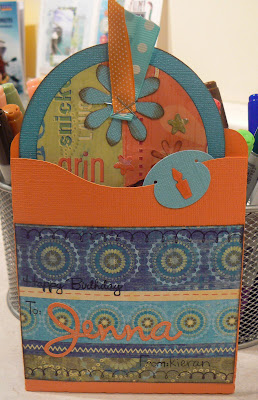 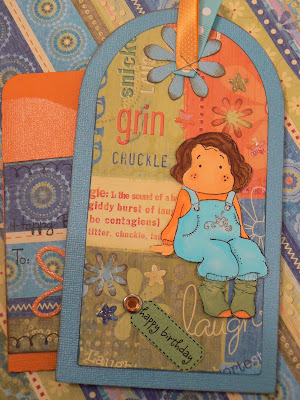 I spent most of the morning cleaning up my crop room. I really needed to re-organize my scraps box and purge, as, it was bursting at the seems. I think my scrap storage isn't workin' for me, sigh! After all the cleaning, purging and re-organizing was done, I decided to quickly make a gift tag, as, my son, Kieran, was off to a birthday party. I whipped it up rather quickly and used an already coloured image of Tilda with birthday cake that was on my table. I had coloured it in last week, when I made a card for my friend. Quite often, I have to colour two or three images before I am happy with one. Not sure if others do that too, but I am rarely satisfied with my first go at colouring in my stamped images. This one didn't make it to the card for my friend but would do just find for this birthday gift tag. Well, after I got that tag together, I remembered Kieran will be going to another party on Friday. So, I made another tag but I spent a little more time on this one. I am quite happy with how it turned out, giggle! I hope the birthday girl gets a chuckle out of it!
Tag and large flower are cut from blue bling Bazzill cardstock on my Silhouette. The inside tag is cut from Kelly Panacci Patchwork and the library pocket is cut out of orange bling as well, on the Silhouette. I cut a strip of Kelly Panacci pp called Giggle Stripes, adhered it to the front of the pocket and stamped stitched borders with Kelly Panacci border stamps. I die cut "Jenna" from QK Maddie Anne alphabet and traced it with my stardust glitter pen. The tab and candle are QK dies and I covered the candle in glossy accents. I used one of my new Magnolia stamps, Dala Tilda. I stamped her on Wausau Bright White cardstock with Archival Brilliance Black Graphite ink and coloured her in with my new Copic markers and pop-dotted her. Added more QK flowers inked some and others are covered Stardust Glitter pen and top-coasted with glossy accents. QK tag die, cut in green bling and I added a Happy Birthday QK Icing. Ribbon is American Craft.
Posted On 3/30/2008

Email ThisBlogThis!Share to TwitterShare to FacebookShare to Pinterest
Labels: Magnolia

omg! soooo cute. the colours are wonderful! i can't believe that you tossed this one aside. it's fabulous!

sorry Tara...lol...it wasn't you. that's just my not-so-good reading skills showing. reading the words but not always registering the content...it's what helped me get that C average in school =D.

Tara this is soooo cute, and you know I am partial to KP stuff!