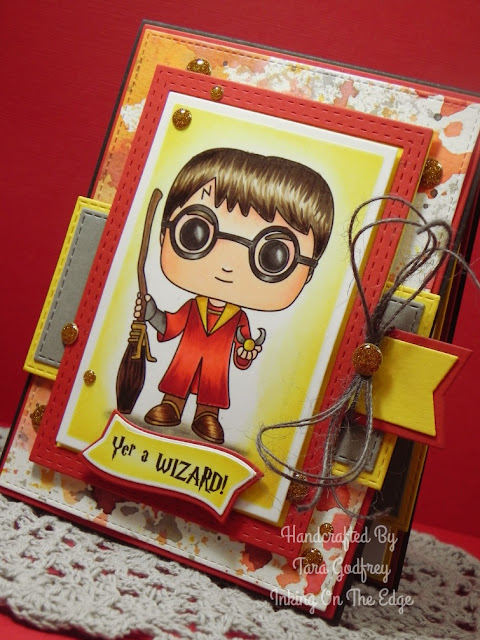 Hello Stampin' friends! It has been a very long time since I've made a card and posted it here on my blog but I thought I would share two cards that I made recently for a friend at work. She recently shared with me her obsession with collecting Funko Pop! figurines (I can see why...they are SO cute) and her LOVE of Harry Potter Funko Pop!
This got my crafty senses working and and I wondered if I could find a Funko Pop! digital stamp or image so I could make my friend a Funko Pop! Harry Potter card. I did a quick google search and discovered these super cute Funko Pop! colouring pages HERE. Quidditch Harry and Spider-Man were exactly what I was looking for! 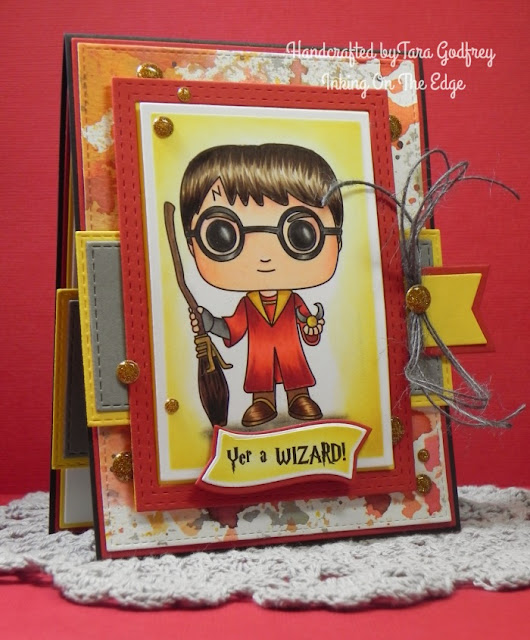 I resized the image to fit my card, printed Quidditch Harry on Neenah Solar White Cardstock and coloured him up with my Copics. I cut him out with MFT Stamps Rectangle STAX and left the image in the die and inked with Mustard Seed Distress ink. I also did the "Ink Smooshing" technique with various Tim Holtz Distress inks to create the background paper. I used my Reverse Confetti All Framed Up Confetti Cuts cut from RC Salsa Cardstock. I embellished with some grey Hemp cord and Your Next Stamp gold sparkly Gumdrops!  I printed the sentiment with the free Harry P font from DaFont.com and cut it out with the the Reverse Confetti Bitty Banners Confetti Cuts and inked with Mustard Seed Distress ink. 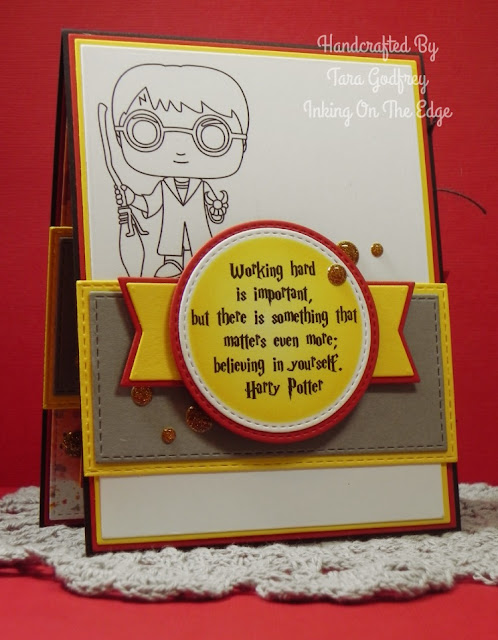 I finished the inside of the card too. I resized Quidditch Harry and printed him out on Neenah Solar White Cardstock to create a shadow image and then cut the card panel from MFT Blueprints #11. I used the Harry P font to create the sentiment with a Harry Potter movie quote that I found on Pinterest. I cut out the printed sentiment with MFT Stitched Circle STAX Die-namics and inked it with Mustard Seed Distress ink and layered it with the MFT Layered Treat Bag Die-namics. 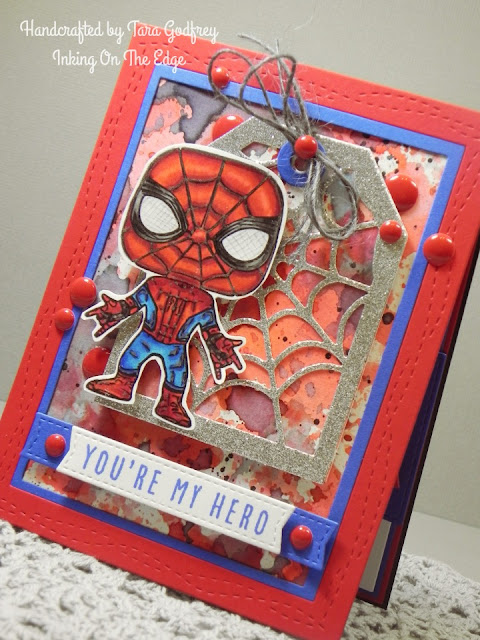 I had so much fun making the Funko Pop! Quidditch Harry card that I made another card with Funko Pop! Spider-Man. This card is for her great-grandson's upcoming 2nd birthday! 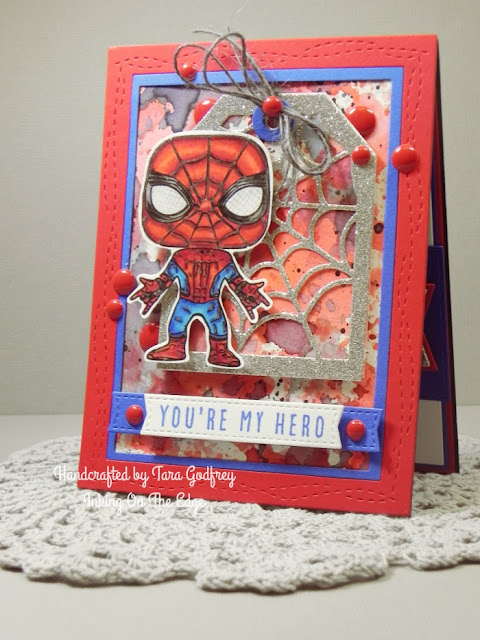 Again, I resized Spider-man, printed him on Neenah Solar White Cardstock and coloured him with my Copics. I fussy cut around the image and popped it up on the Reverse Confetti Web Tag Layer Confetti Cuts cut from silver glitter cardstock. I created some background paper using the "Ink Smooshing" technique with Tim Holtz Distress inks and used the Reverse Confetti All Framed up Confetti Cuts for the stitched border cut from RC Brick Cardstock. 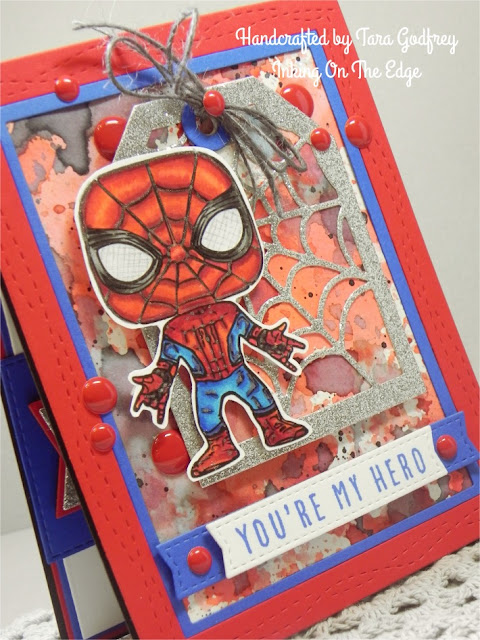 I tied the tag with grey Hemp Twine and embellished with some YNS Red Gumdrops. I stamped a sentiment from the Reverse Confetti Tie-rific Stamp set with Stephanie Barnard ColorBox Premium Dye ink in Blueberry and cut the sentiment out with the MFT Stitched Sentiment Strips.
I tried to recreate the texture/dimension on the eyes of the actual Funko Pop! Spider-man figurine and used my Gelly Roll Glitter Pen in Clear Star to get the desired effect. 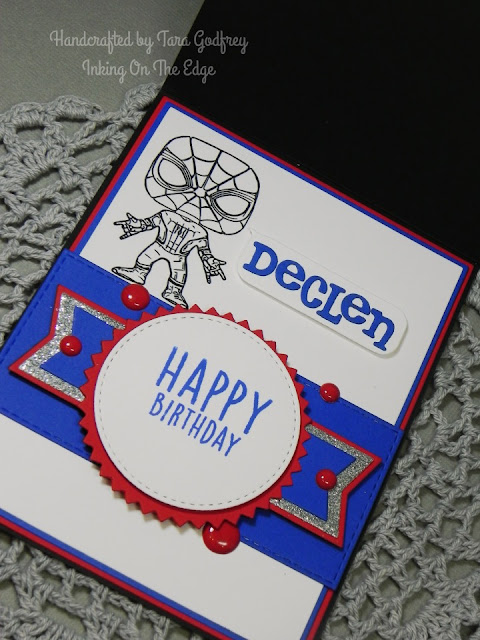 I finished the inside of this card with another printed shadow image. I was able to personalize it using an old QuicKutz 2X2 Olivia Unicase Alphabet Die Set and stamped a sentiment from the Reverse Confetti Whole Lotta Happy Sentiment Stamp Set.
Thanks SO much for stopping by and having a little look at the cards I made with the Funko Pop! Colouring page images.