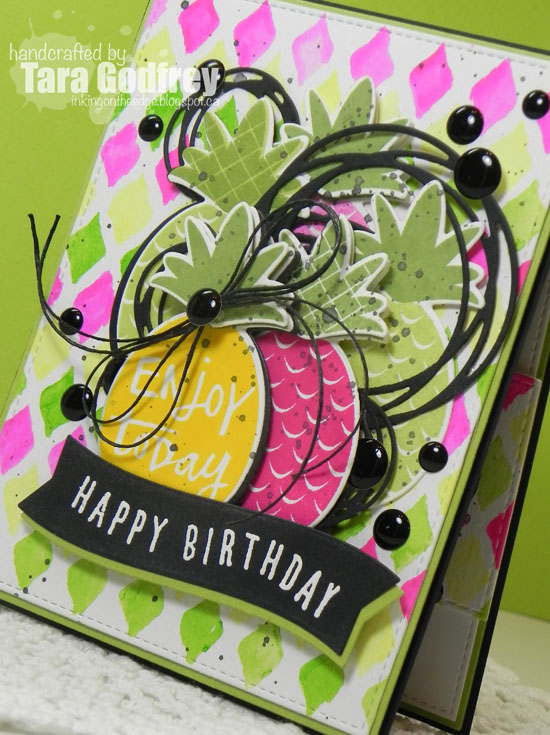 
The LEAD of this challenge will be invited to be a guest designer in an upcoming challenge! 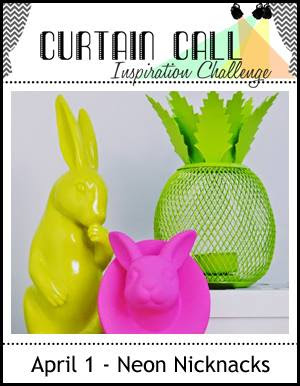 I've been on a bit of a "watercolouring" kick as of late and I wanted to make my own watercoloured paper with my MFT Fishnet Stencil inspired by THIS tutorial post/video by Barbara Anders on her fabulous blog Paper Pursuits and the green pineapple nicknack in the inspiration photo. I decided to use my ZIG Clean Color Real Brush Markers instead of an inkpad and waterbrush. I used the the Pink, Light Green and Lemon Yellow markers and water to watercolour in each section of the stencil on Ranger Watercolour paper. I then cut the sheet down with the stitched rectangle die in Blueprints 13. I added a few splatters with Heidi Swapp Color Shine in Black Velvet.

I finished off the inside of the card while I was at it and and another watercoloured stencil strip of paper and added a white embossed sentiment stamped from the With Love Sentiments Stamp set. I embellished with another Razzle Berry pineapple.

Thanks So much for stopping by and havin' a wee peek at my Reverse Confetti Pineapples Aplenty card for the Curtain Call Inspiration Challenge - Neon Nicknacks.

Make Sure to Visit each of the Designers' blogs for more inspiration!

Stop By the Curtain Call Inspiration Challenge - Neon Nicknacks for the challenge details and to play along with us!

I just love the background you created!

Beautiful inside and out, Tara! Loving all of those scrumptious layers and details!

Perfect for the CC challenge... very inspiring. Love those pineapples, and love all of the black accents.

What a fantastic card Tara. Love those neon pineapples with the black spackles. The bright and colorful background looks great too.

I love your fabulous take on the inspiration photo! It's so fun!